This tutorial would explain on how to convert a list of “text which represents numbers” to numbers.

In Calc, if you enter numbers with an apostrophe at the beginning, it would be considered as number. For example, string representation of a number can be entered as ‘123 as below. 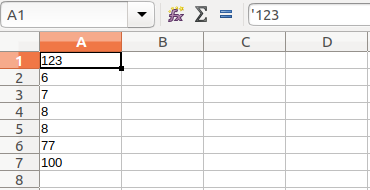 To convert, the above list, use VALUE function. This function, takes the string and returns as numbers as below.

Enter the formula as =VALUE(A1) in cell D1 and drag the cell’s right bottom plus sign handle till D7.

As you can see, the values are converted to numbers using the function.

Though the texts are now numbers, but their internal value still remains the formula. To remove the formula and get the actual converted numbers, use paste special feature as below.

Right click in F1 cell and use option: Paste Special -> Paste Special. Then use the option button Values Only at the top. 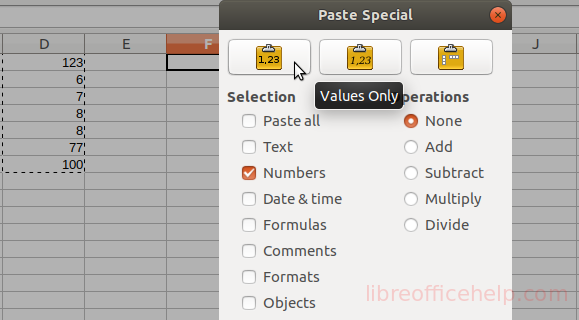 Now you can see the actual numbers instead of the formula.

This way you can quickly convert text to numbers.