This tutorial would explain various ways of COUNTIF function in LibreOffice Calc which can be used to count strings, numbers from a cell, range, rows, columns etc.

Returns the count of rows or columns that meet the criteria.

With Number in Formula 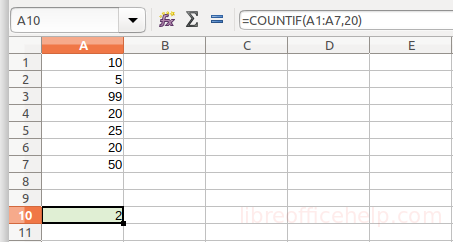 With Number as Cell Reference

You can also specify 20 as a cell reference. The result would be similar. COUNTIF would try to count the value specified in cell D1. 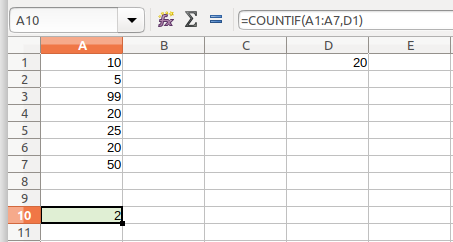 COUNTIF also can count using logical operators. It can count number of rows, columns which satisfy the greater than, less than conditions.

In above example, if we need to count number of rows having values greater than 20, use below formula. Note that the greater than operator should be used as a string (i.e. use double quotes). 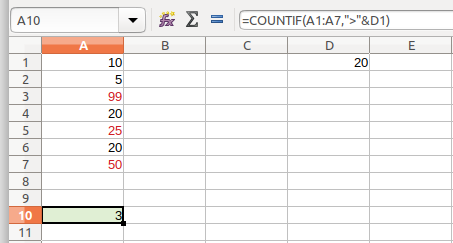 Without cell reference you can use COUNTIF(A1:A7,”>20″) as well which would give same result.

Use “<” sign to find out number of rows less than the specified value. 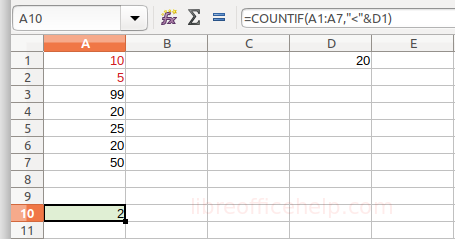 Similarly use “<>” sign to find out number of rows not equal to the specified value. 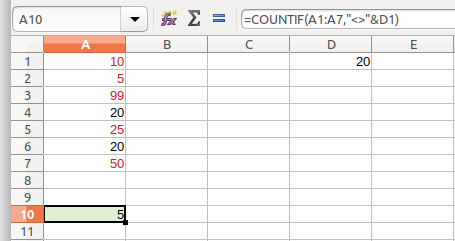 You can use “=”, “>=” and “<=” in the above formulas to get the results for Equal, Greater Than Equal and Less Than Equal to a specified value.

You can also combine two COUNTIF functions to achieve more. Below example returns the count of rows which is having 20 or 10.

Using another function inside COUNTIF

It is possible to use another Calc function in the criteria of COUNTIF. Following example returns the values greater than the average of A1:A7 i.e. 32.7

SEE ALSO:  IF Function in LibreOffice Calc - Basics and Examples

COUNTIF can be used to count any text, string as well in Calc cells like the numbers. The formula is exactly the same. Only the criteria should be a text/string specified by double quotes.

The following example counts the text “apple” in the range A1:A10. 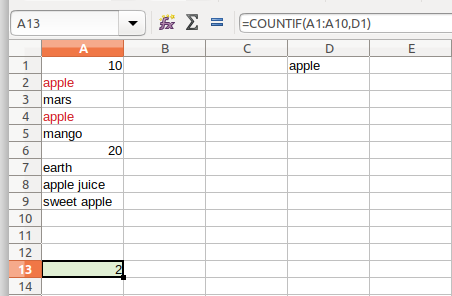 The above example A1:A10 is having mix of values – numbers and texts. If you want to count the rows having texts only, below formula can be used. 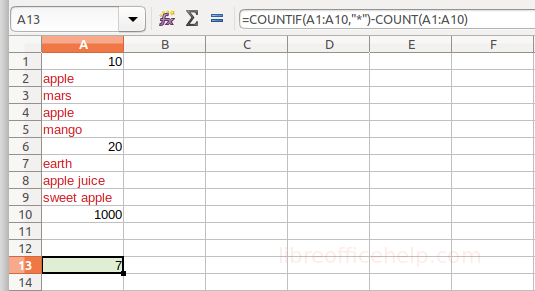 a) To count all the cells with text start with any text (e.g. “apple”), use criteria as below

b) To count all the cells with text containing any matching string (e.g. “apple”), use below criteria

c) To count the cells with matching string with any one character at the end, use below criteria

So, this is how you can use COUNTIF for various usage in LibreOffice Calc.

Looking for something else?

Be an expert on LibreOffice.

This site uses Akismet to reduce spam. Learn how your comment data is processed.

Be an expert on LibreOffice

What’s Expected in LibreOffice 7.0. All You Need to Know.

How to Type Unicode Characters in LibreOffice

Basics of Relative, Absolute and Mixed Reference in Calc

How to Add Notes in LibreOffice Impress Slides