This tutorial would explain how to show fewer decimal places in a Calc Cell.

Any decimal number that contains multiple digits after the point can be entered in a Cell. However if the digits are huge, it is often wise to show only fewer digits for better visibility and understanding. For example, say a decimal number 4.175 is written in cell A1.

Now, click on the “Delete Decimal Place” button from the toolbar.

Each time you click the button, Calc would reduce one decimal places and show a round off view of the number.

Calculation when decimal is reduced

To get back to the original number, click on the “Add Decimal Place” from the toolbar. 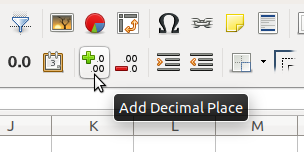